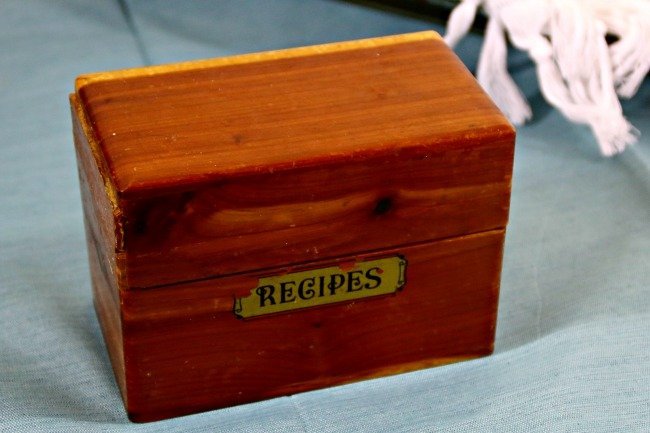 This box was purchased with another box, VRP014 – Red and White Tin Box, along with a Ziploc bag full of recipes. The seller of this box sent me the following:

I wish I had more information than this – I purchased these right outside of a small town called Monticello, Iowa. They had an estate auction and sold the house and the contents of the house. I don’t have a name or any other information. Hope this little bit helps, and that you enjoy your recipes. Thank you, Carol

I am giddy that I have been able to know more about the potential owner of this box by using the following clues:

I found a deposit slip with the names of Donald M. ADAMS and Mrs. Edna Mae ADAMS who lived in Salt Lake City, UT. Before the internet, we didn’t have to worry too much about drained bank accounts but I cannot believe that somebody would give the recipe box owner a recipe on the back of a deposit slip with all their banking information. With this assumption, I believe that Edna was the owner of the box.

From these two clues, I was able to use Ancestry.com to track down Edna and her family to find even more information about the authors of these recipes!!!

The owner of the recipe box was either Edna KRESS Adams or a friend of the family who knew Edna and her sisters. I say this as the recipe box includes recipes from this family. The vintage recipes with this box were given to the owner by:

More on Edna KRESS Adams (assuming she was the original owner):

Edna and her husband, Donald, were both born in Iowa and moved to Salt Lake City, UT. There they lived until she passed and then Donald moved back to Iowa. That is probably how this box ended back in Iowa as he took their belongings back to Iowa with him.

Edna’s obituary from the WCF Courier:

Mrs. Adams graduated from Quasqueton Consolidated School in 1942 and attended Hennigers Business College. She was employed at the Veterans Hospital in supply.

Survivors include: her husband; and a sister, Marian Nelson of Independence.

Preceded in death by a sister, Grace Nelson; and a brother, Dale Kress.

Condolences may be left at www.reifffuneralhome.com.

This article from Reinbeck Courier probably answers how this recipe box ended up in Iowa even though they probably lived in Salt Lake City, UT:

The Adams were both born and raised in Quasqueton, Iowa, and were married in Waterloo in 1944 before spending most of their lives in Salt Lake City, Utah after Don’s service in WWII. After Edna Mae’s passing in February 2007, Don moved back home to Buchanan County. Don passed away in November 2014.

This article from the Community Foundation of Northeast Iowa tells us her husband’s occupation.

Don, an interstate trucker for most of his life, said, “I want to continue our dream of giving back to the area where we were born and raised, now and in the future.”

Rice Pilaf With Cherries and Almonds