Information about this vintage recipe box:

The design includes a grinder, coffee pots (a couple of different ones), hanging kitchen utensils, various fruits, pots and pans, and salt and pepper shakers.

Marked “Ohio Art Co. Made in USA, Bryan Ohio” on the bottom

The seller shared the following information with me:

These recipes came from Shelby Ohio Richland County (Shelby, Richland County, Ohio) estate of a veterinarian we cannot remember his name we are going to ask the auctioneer that done the sale and see if he has the family’s name and when we find out we will sure let you know.

I purchased this box from a lot sale on eBay 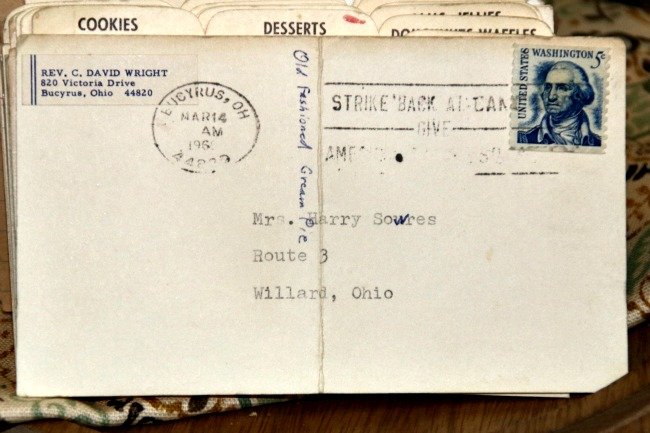 Based on the clues in the box, I believe the owner was Merridelle Ruth DePUE Sowers who is the daughter in law to Goldie LEWIS Sowers.

Persons mentioned in this recipe box and their contributions to the recipe box are listed below. Information for each person was found using Ancestry.com.

As you can see, the owner of this box collected a lot of recipes from family and friends.

Mrs. Lanker was Adelaide Olson who was born in New York in 1919 and at some point in her life moved to Ohio, where she passed away in 2001.

I do not see a relation to the original owner of this box.

She was baptized at the Bethany Lutheran Church in New York in 1920. Her parents and older siblings were born in Norway and it appears she was the first Olson born in the United States.

I found records on Ancestry that show she was a Navy veteran during World War II!

Corrine was born in 1918 in Ohio and passed away in 2002 in Ohio. She was the wife of James W. COE and the daughter of Harvey Carl GREER and Lelah C. NICHOLS.

I wonder if this is Reverend C. David Wright, husband of Mirian listed below. I have no other clues to who David could be.

At this time I do not see a relation to the box owner.

Doris was born in 1904 in Ohio and passed away in 1992 in Ohio. She was married to Clarence HESSLER and what the daughter of George SCHWAB and Olive May BORDNER.

At this time I do not see a relation to the box owner.

Elsie was born in 1914 in Ohio and passed away in 2005 in Ohio. She was married to Theodore Frank STOCKMASTER and was the daughter of James Phillip DAWSON and Mabel Fern COX.

She is the owner of Vintage Recipe Box 001 and the mother of Dr. Harry Lewis SOWERS, who married Merridele DePUE.

I THINK this is Betty Jean RHINEHART. If so, she is the daughter of James Harold RINEHART and Mary Ada BROCKLESBY. James was the son of Silas C. RINEHART and Emma Della QUAY, who were Merridelle’s grandparents. This would actually make them cousins, and not niece / aunt. I will continue to search to see if I missed a Jean or if I am wrong about who the owner of the box actually was.

On the meatloaf recipe, there is a notation of (Sister) (Jean) which makes me question if there are two Jean’s (one a relative and one from church) or if they are the same person.

Jean Elizabeth HANSMANN Fulton is the wife of Joseph Fulton.

Jean was born in 1928 in Ohio and I have not found further information on Jean. I wonder if there is a connection to the family and this is who they call Aunt Jean or could she be Sister Jean.

I believe this is the Joe Fulton I found from Willard, Ohio and is not related to the original owners of this recipe box.

Below are the recipe found in Vintage Recipe Box 003:

As Good as Mashed Potatoes

You can find gold and red recipe box made by Ohio Art Company on Etsy.

Oh my goodness! I knew Meridelle and many of the people mentioned from her recipe box from my church growing up. I just asked my mom for Arlene’s apple dumplings and was looking on Pinterest and came across this! What a small world! I am so excited right now!

I love this and will be in touch to see if you can help me fill in some blanks we have. THIS IS SO COOL!