When the temperature drops, we are often found cooking our favorite soups and stews.

The heartiness of a beef stew is pure comfort food to warm our bodies and soul on a cold day or night.

Did you know there isn’t a holiday that celebrates stews but January is National Soup Month?

A stew is a combination of solid food ingredients that have been cooked in liquid and served in the resultant gravy.

Stews are similar to soups, and in some cases, there may not be a clear distinction between the two.

Generally, stews have less liquid than soups, are much thicker and require longer cooking over low heat. 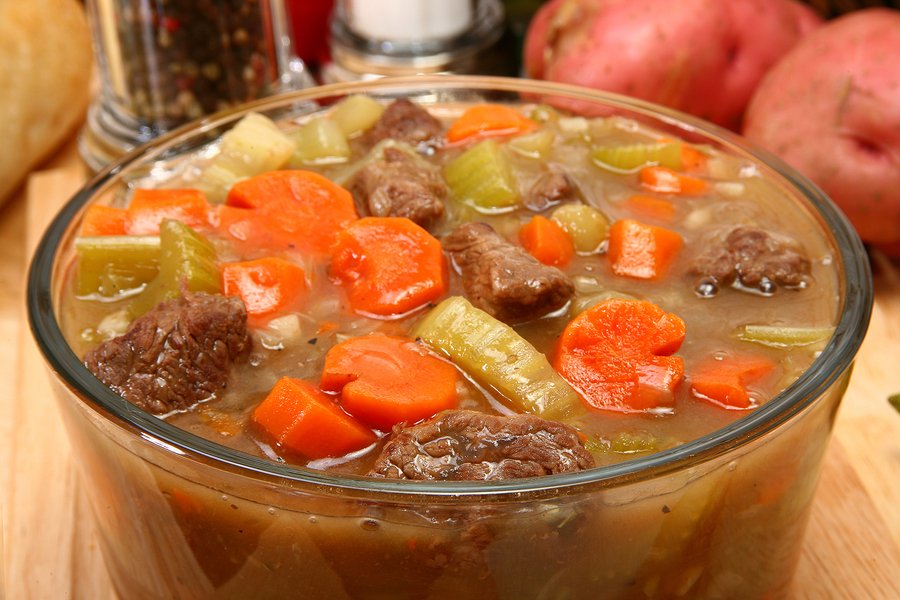 How to Make Beef Stew

Stews are typically cooked at a relatively low temperature (simmered, not boiled), allowing flavors to mingle.

There are several ways to prepare a stew from stovetop, oven baked, and in slow cookers.

Dishes used can be pots on the stovetop, casserole dishes, and Dutch ovens (my favorite way).

Ingredients in a stew can include any combination of vegetables (such as carrots, potatoes, onions, beans, peppers, mushrooms, and tomatoes) and may include meat, especially tougher meats suitable for slow-cooking, such as beef.

While water can be used as the stew-cooking liquid, beef stock is also common to use as the base.

Stewing is suitable for the least tender cuts of meat that become tender and juicy with the slow moist heat method. This makes it popular in low-cost cooking.

You want to use cuts that have a certain amount of marbling and gelatinous connective tissue give moist, juicy stews, while lean meat may easily become dry. Chuck is the preferred cut and it is recommended that you avoid meats such as sirloin that will wind up a dry chunk of meat in your bowl.

A lot of grocery stores have “stew meat” pre-packaged for you.

Still in doubt? Ask your butcher which meats he has available for a perfect Beef Stew.

Typical spices used to prepare and season the beef stew:

How to Thicken Beef Stew

By coating the beef in flour before searing, the base will naturally thicken.

Stews may be thickened by reduction or with flour, either by coating pieces of meat with flour before searing or by using a roux or beurre manié, a dough consisting of equal parts of fat and flour.

Thickeners like cornstarch or arrowroot may also be used.

I prefer to use a “fast flour” such as Wondra since it dissolves more quickly than flour so the base is thickened without lumps.

If you want to use a vegetable puree to thicken your stew, here’s an interesting tidbit from Exploratorium:

The process of pureeing releases both starch and fibers, which thicken the soup.

With starchy vegetables, pureeing breaks down cell walls so their starchy contents spill through the broth.

In vegetables such as broccoli, the cellulose that once held the stalk stiff is now transformed into minute fibers, which also add to the thickness of the soup.

What Goes With Beef Stew

While soups are almost always served in a bowl, some stews may be thick enough to be served on a plate with the gravy as a sauce over the solid ingredients.

Mashed potatoes are a favorite to serve with Beef Stew.

I prefer a crusty bread to soak up the delicious stew broth.

Cornbread is a popular favorite too. Pour a nice scoop of beef stew over cornbread or in a bread bowl for some wholesome home cooking yumminess.

While a bowl of beef stew is a meal itself, some folks like to have a side dish such as polenta, roasted root vegetables, or rice.

If you want to “lighten” the hearty dish then serve with a light salad.

Can You Freeze Beef Stew

A few of these recipes make a lot and there are notes that you can freeze the leftovers.

Below are the beef stew recipes published to date on our site.

As new recipes are published, we will also add them below to help you find them easier.

Beef stew slowly baked in the oven is a popular way to prepare this warm and wonderful dish. 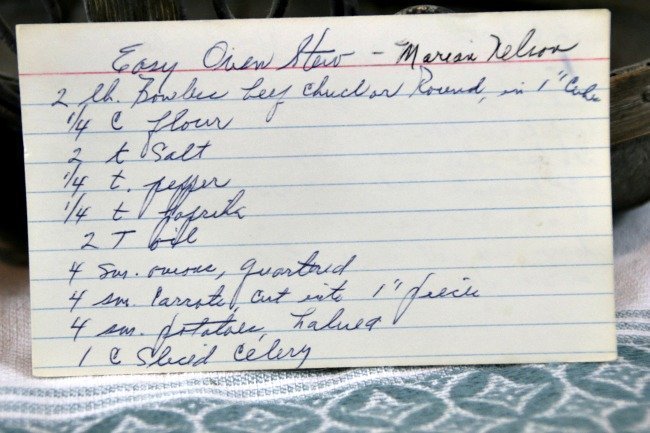 This Easy Oven Stew is from Vintage Recipe Box 015.

There is a notation that the recipe for this stew originated from Marion Nelson.

The base of this stew recipe is water and tomato sauce mixed with onions, carrots, potatoes, and celery. 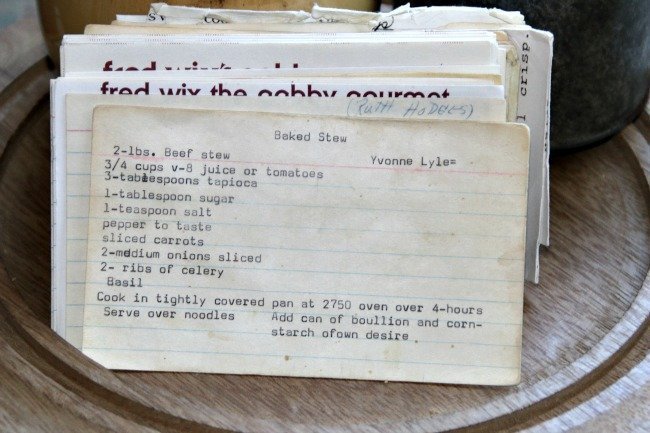 This Baked Beef Stew is from Vintage Recipe Box 015.

There is a notation that the recipe for this stew originated from Yvonne Lyles.

The base of this stew recipe is bullion, V-8 juice or tomatoes mixed with onions, carrots, and celery.

The finished recipe is served over noodles.

This Mother’s Stew is from Vintage Recipe Box 004.

There is a notation that it is from Lena DePue.

Before the stew is finished cooking, dumplings are added.

Click here to view the full recipe for Mother’s Stew.

Goulash is a stew of meat, usually seasoned with paprika and other spices.

Originating from medieval Hungary, goulash is a popular meal predominantly eaten in Central Europe but also in other parts of Europe.

Its origin traces back to the 9th century to stews eaten by Hungarian shepherds.

This Hungarian Goulash recipe is from Vintage Recipe Box 034.

The base of this stew recipe is beef bullion and tomato sauce with the only vegetable being onion.

Click here to view the full recipe for Hungarian Goulash. 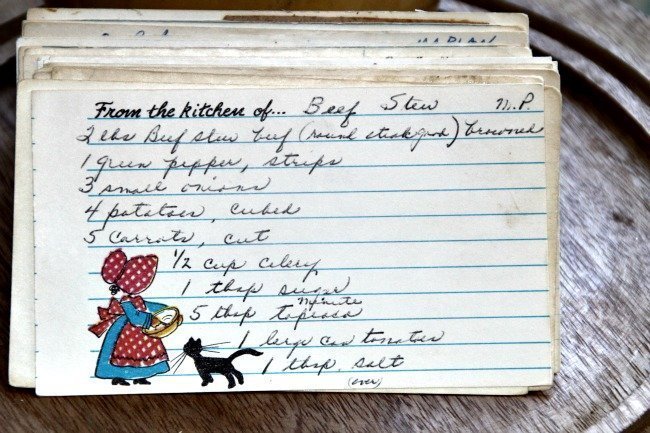 This recipe for Beef Stew is from Vintage Recipe Box 015.

Front of the Beef Stew recipe card with the notation that the recipe was from M.P., which we will assume is Marian Palmer.

The base of this stew recipe is tapioca and tomatoes mixed with peppers, onions, celery, potatoes, and carrots.

Paprika is an added spice which may indicate this recipe is more like a Hungarian Stew.

Click here to view the full recipe for Beef Stew.